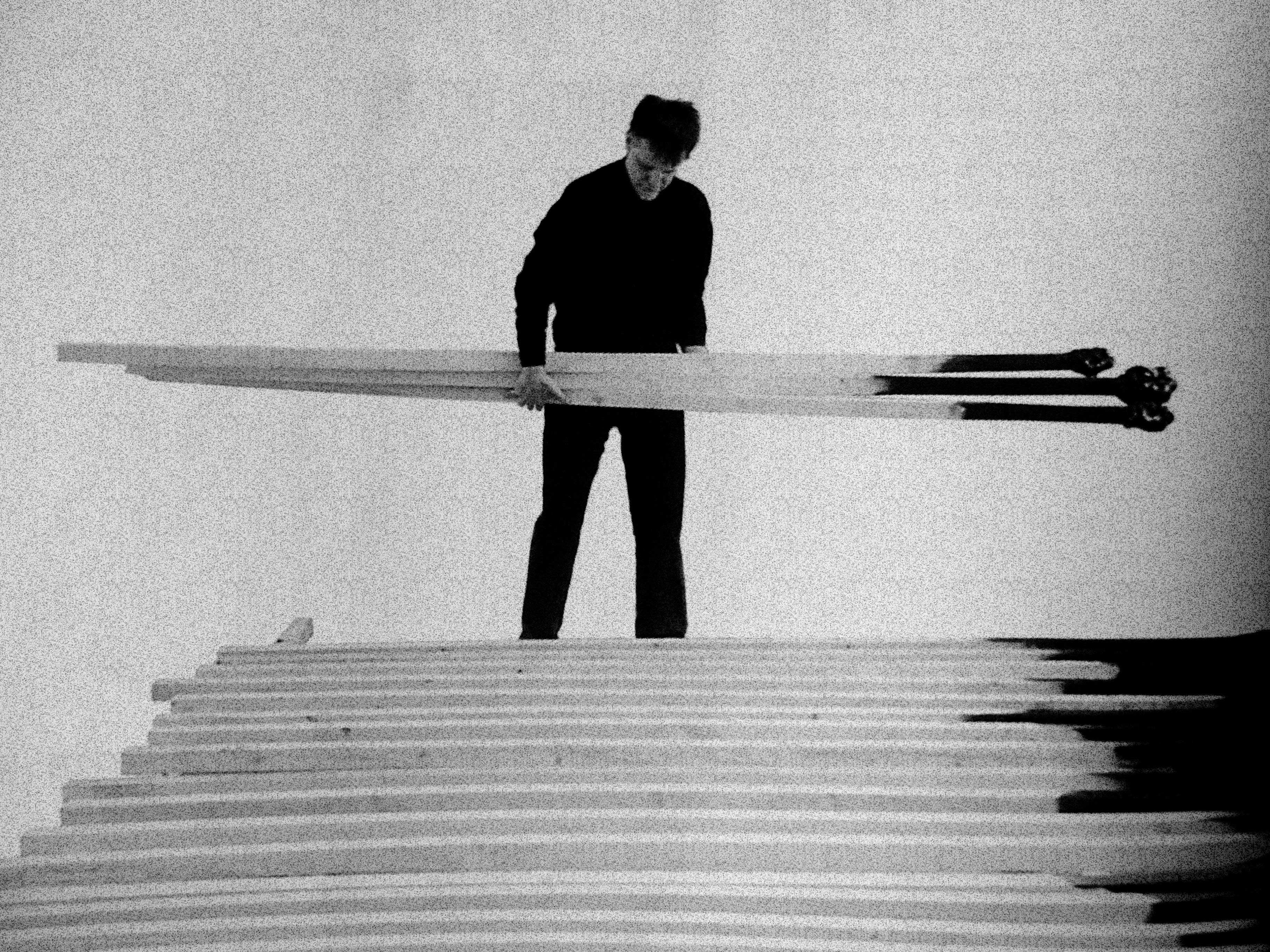 (Instead of a Manifesto)

01. Assuming that fractal is such a geometric figure a certain part of which repeats itself again and again obeying the principle of self-similarity, another procedure should be established for fixation of pictorial fractal. Strictly speaking, I deem it necessary to transgress a self-similarity principle itself: this «change» is caused by urgency to embody every time a new configuration of the fractal form. In this situation, it is necessary to identify an object status of some substance which does not have denominations within the pictorial language, the denotation of their illusory impact which is in every fiber connected with comprehension of verism, with its inspiration to impress a detail of the shimmering world.

02. Speaking of verism, it would be pertinent to recollect its origins tracing back to the Italian and French culture of the late 19th century. Verism, in this context, is a universal imprinting tonus of naturalism leading us to a neutral lucidity of no-man’s vision hovering on the near side of the explicit which is resuscitated by its ability to be seen in the atmosphere of the soul warmth as a pain factor. The obviousness of this event lies in the fact that it seemingly has not existed, yet, at the same time, it exists on the meridian of a scrupulous openness.

03. In his personal creative effort, the artist is assigned a task to liberate fractals from “the ecology” of bad infinity through the help of the local amplitude of verism and thereby open the way to creation of pure visibility of the image itself.

04. We will leave aside the dramaturgy of social tension which escorts the modern views on art in the sequence of a permanent false start of the reality itself. In essence, fractal verism is an inner opposition of the artist to the dictatorship of profane ambitions in the artistic medium which exists without hope of moratorium on modern art overproduction as though tempts a vinyl darkness of a stuck disc thus synthesizing a radius of tracks from sarcasm to gender self-assertion and so on. In addition, a curatorial supervision is like the Sword of Damocles hanging over everywhere provoking mass conformism of artistic commodities to appropriation of reality. Curators and art critics implement their ideas due to an artist, their reflection is concentrated in the hierarchy of artistic meanings, and they construct a discourse of the work by interpreting the comprehension on meanings depending on a given theme. Yet under these situational and behavioral constraints, a creative person has to give preference to being more insane than the reality itself: it is only then an ideal circumstance will be probably created for fractal verism, allowing him to admit a genuineness of one lengthy shot in the flickers of a lifetime.

05. So, let’s return to the idea of pictorial fractal, to its modulation to transgress the principle of self-similarity. All happens in the spontaneity of the event, by the web of a pictorial style the artist reviews the naturalistic features of the external postulating the idiomatic pathos of «And in Arcadia am I». Here, every fractal in every step of creation of new configurations becomes a certain metric foot and pace of verism. We know that in the 19th century, George Cantor in his experiments managed, through a simple procedure, to transform an ordinary line into a group of unlinked dots which were named "Cantor’s Dust". The same is here, in the poetics of fractal verism, a visible object can be dispersed to the threat of abstract emptiness and back to the eluding idyll of an authentic place. In general, fractal needs verism and verism needs fractals.

06. Following the spectrum of a fractal shot in the focus of verism flesh and essence of which coincide with the length of our common destiny, the artist tries to express a motionless image in the painting by vibes of time itself in which his biographical audacity has encroached upon the optics of photographic veracity, to highlight the tiniest windings of the visible world in the deenergized chronology of communicative measurement when an infinitely small point in the painting is loaded with a pictorial universe on the verge of coincidence with nature of graphic values. The focus point is that in the process of creating a pictorial canvas the painter catches essential moments of the world order itself, its construction material through the fractal form of verism.

07. To evoke memory by the core of a photographic picture – this way is fraught with inevitable and extremely fruitful errors. A black-and-white photography or a preparatory drawing determine its line of visual expression through transfer of the image onto a two-dimensional surface of the canvas, a segment of compositional solution for subsequent adaptation of the fundamentals of color matching, be a story line in an obsessive striving to readdress the nameless writing style of the image to a visibleness of one and the same recognition.

08. The photographic picture itself is a shot of a fractal pause immersed into a language chronometry of muteness, into a meditative confusion without cinematographic self-similarity, without an effect of developed action: to point to motion and speed. In his time, Filippo Tommazo Marinetti in his manifesto enunciated his views of ubiquitous speed, technological progress, war, violence, revolution and struggle that has led the artistic representation to servicing of social paradigm of the external. Works of art have acquired a poster unification of futurism ideas. All has been reduced to image deformation towards conceptual scholasticism and design aesthetics, towards an identification gesture of quick reading. And as a consequence of this, art at this stage of avant-garde dominance has turned into a logic of context understanding, into a certain narrative of endless talking on world problematics in curatorial strategies and not only this. In my view, contemporary art has entered a protracted phase of its self-absorption, an archeological lot in fruit-bearing of all sorts of modern times artifacts like a maneuvering mirage in the post-modernist mainstream. Yet it has nothing to do creation of an image, with its ripening as memory of spatial uncertainty.

09. Within one pictorial shot, the artist’s labor submits to the terms of stenographical insanity of identifying world in the idea of necessity to fix a sign of the art’s disability proper to influence anything and in urgency of poetic voluntarism to recode itself in the sources of former vibration, to imprint a straightforward visibleness in the script of all-round understatement. In the vacuum of the fractal pause, it is important to reach the empire of verism at a perfectionism level in execution of pictorial canvas where the inner borderline of the painting has been dictated by an atmosphere of afternoon heat and the color of becalmed dust. Where the space of air increases the reverse of the moment, to burst open the local intuition, to perform exactness of the case itself in shaping of equal-in-rights things at the expanses of innumerable naturalism.

10. In essence, the process of creation of work of art is a place of artist’s expulsion, his stay in Sisyphean efforts not to create any image (as iconoclasts did) , only a detailed painting topography reigns here which testifies to a new defeat of the artist himself in his desire to bring closer the horizon of the image visibility beyond the shape. Deepening the imaginary place by micro-point heartbeat of fractal writing, the color, like luminous pollen on the tip of a sable brush, makes a pilgrimage to the sources of an unreciprocated deed, to the threshold of oblivion, to the idyll of metaphysical melancholy, not by any means to Mecca of solitude but to the veracity which is perceived as "a radical illusion" of atemporal naturalism in the painting guise.

11. The protesting consciousness should be soothed by a neutral view of reality. It should not seek to turn the work of art into an instrument for struggle against somebody or something. In the creative act, the artist should be, in spite of anything, on the side of his own disability to find himself, at the periphery of desolateness, in unmentioned oblivion, away from superficial omnipresent informational impact, from video cameras of total tracking, from scientific and technological progress excarnating the energy of creation into the comfort of weak will.

12. Not to evade the inner agitation arising in some sensation of a personal injury and vulnerability and in apprehension that every new work, in the long process of its creation, is «a chess game» with death and this gives the master a chance to be more prudent, exclude a surrogate perception of future and prevent a simulation of the present in all its manifestations.

13. Speed and rhythm are subject to code conversion in the meaning of irrational and timeless. On this basis we set a distance of impersonal perception where here are no notions of good and evil, no evaluation, only the way of impressions and tranquility in the resoluteness to realize fractal verism in its unprecedented aimlessness, just to exist simply, here and now, highlighting a dramatic nature of samsara.

14. Not to lose an unmotivated opportunity to be open in comprehension of new vibrating magnetism of soulful warmth in the nature of external. Not to drown the object proper in the conceptual rigmarole of all sorts of meanings. Be able to calque a stream of emotional tension on the shape-generating bed of the painting. Be on the alert in understanding of the up-to-the-minute atmosphere as if you are in side of a photographic event which message has been sent exactly to you.

15. Fractal verism in painting rejects the mechanicalness of computer modulating but it sharpens the artist’s attitude towards devices of color making. This means that it is necessary to specify the idea itself of having been made by the module of color form, its fractal value by the areal of personal motivation: create just this way, not otherwise. Here is triggered a search of fragmentary construction of each part of the painting which is centered by emanation of empirical imagination. The color modus from the fixation point to choreography of color veins is accompanied by obstinate efforts to anticipate the image by a shelter of documenting time, to perceive a general compositional unity, by what that is impossible to add or remove after targeted art direction of all items. A technical device in the stylistic outline should avoid an obsessive presence of decorative treatment and its laced peril leveling the image. Color, as a form component, breaks up into microscopic evaporation at the needed touchdown point on the canvas: it is this action that is registered by a silence of fractal knock between the beats of your heart allowing the dotted fleetingness to identify the optics of photographic painting with the sign of pulsating self-similarity. And, perhaps, beyond all doubt, it is just audacity and despair that, in point of fact, turn out to be meditative messengers which give evidence of the unavoidable truth that the artist is destined to implement what was promised to gods at the X-hour in his pre-life fatherland.

The text by Vyacheslav (Yura) Useinov edited by Shamshad Abdullayev. 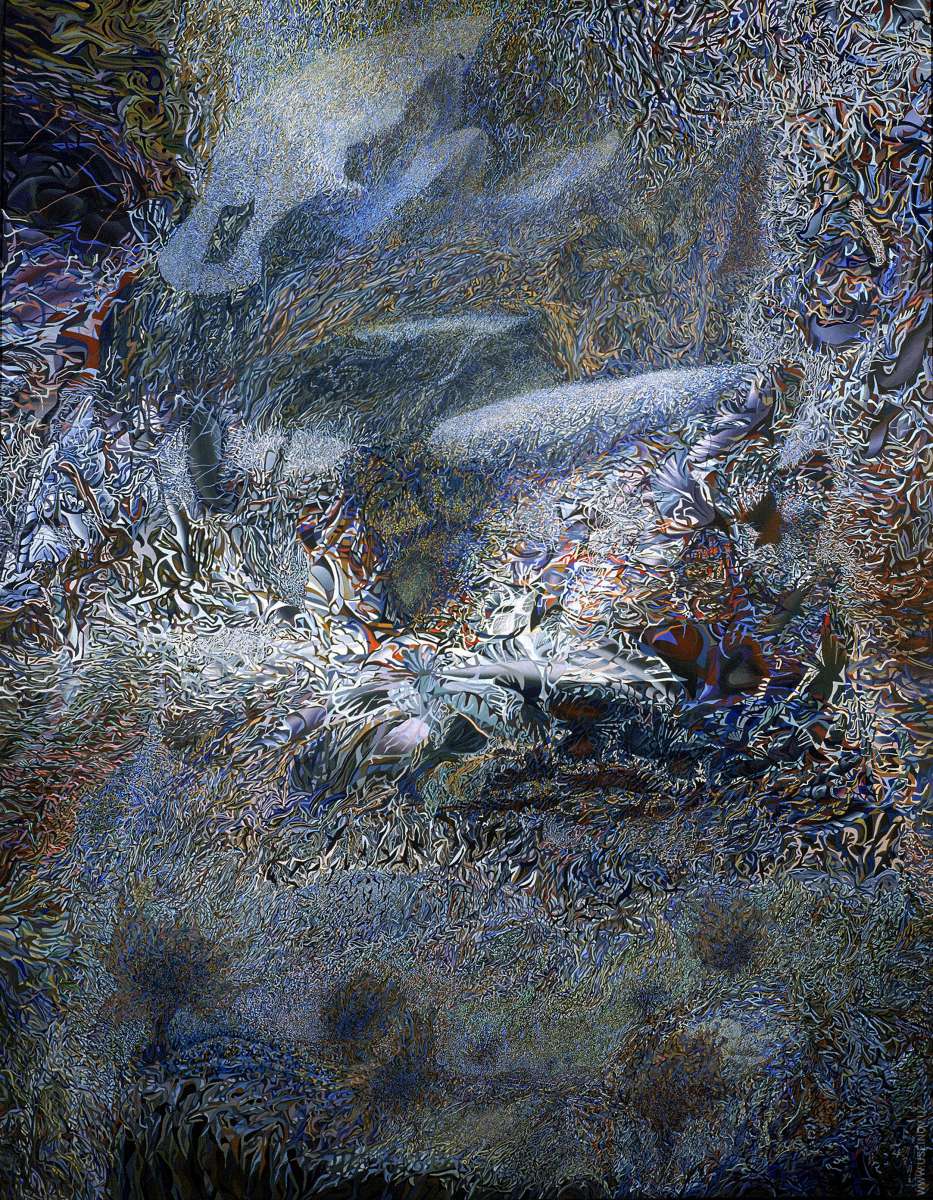 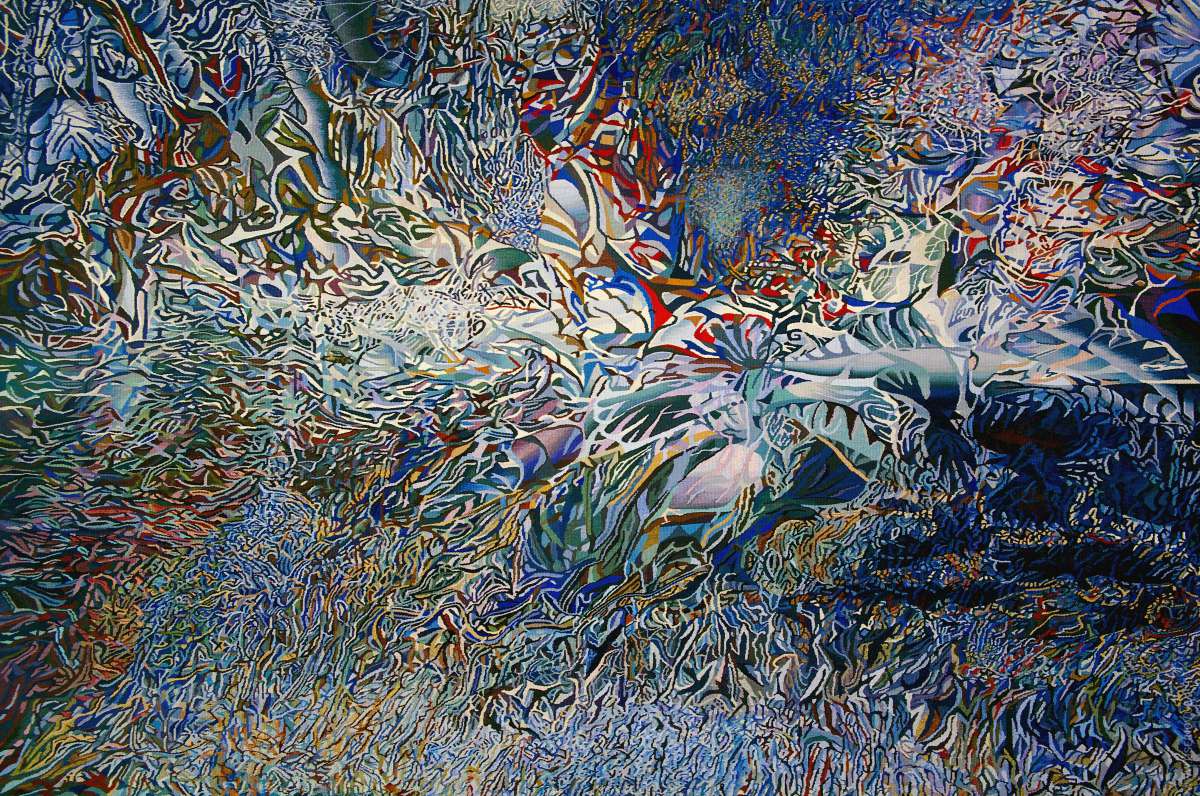 Fractal fragment of the picture: "The Message". #1 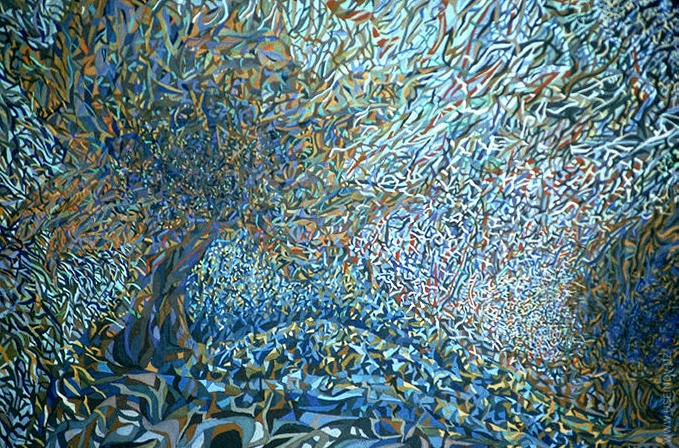 Fractal fragment of the picture: "The Message". #2 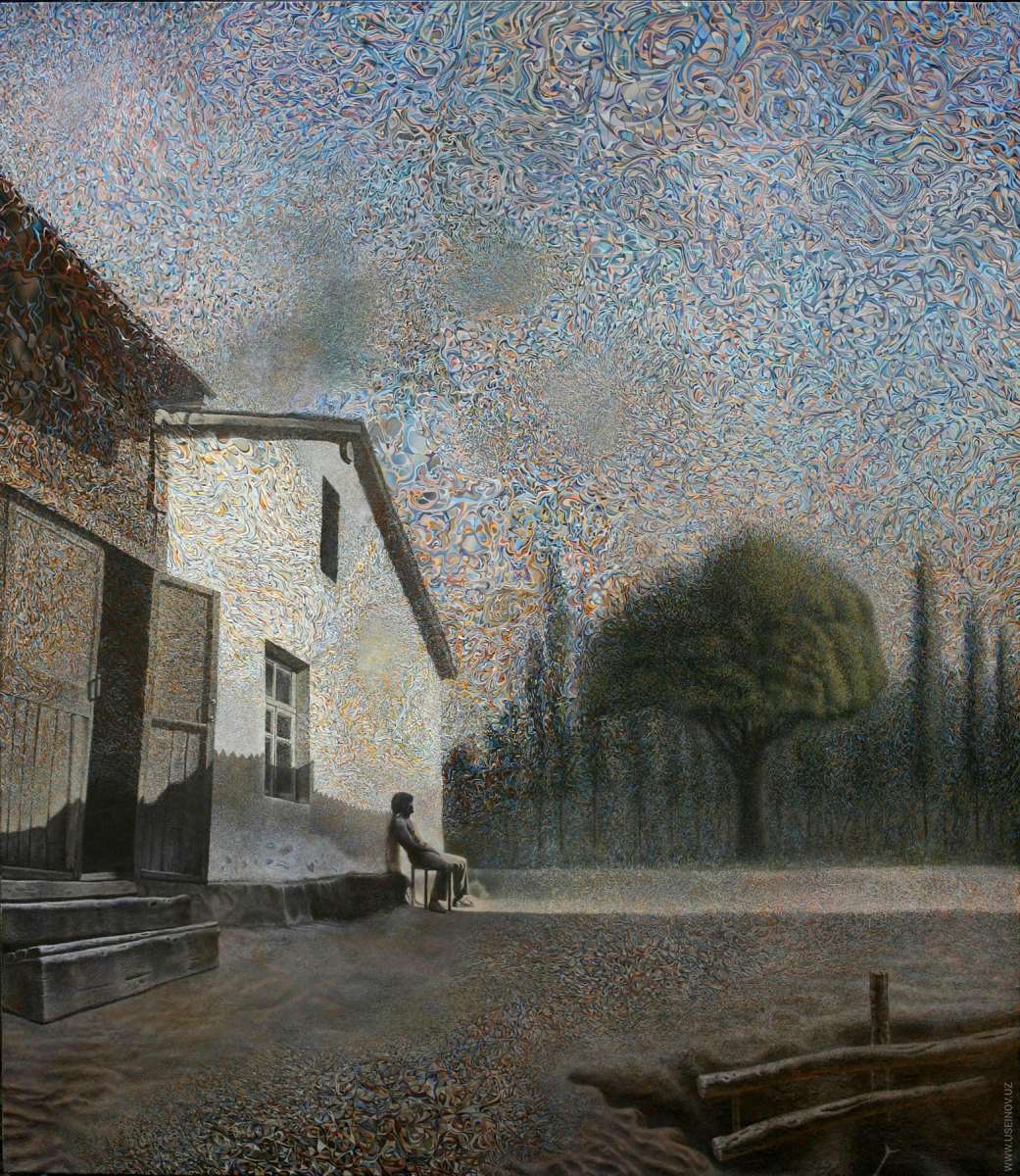 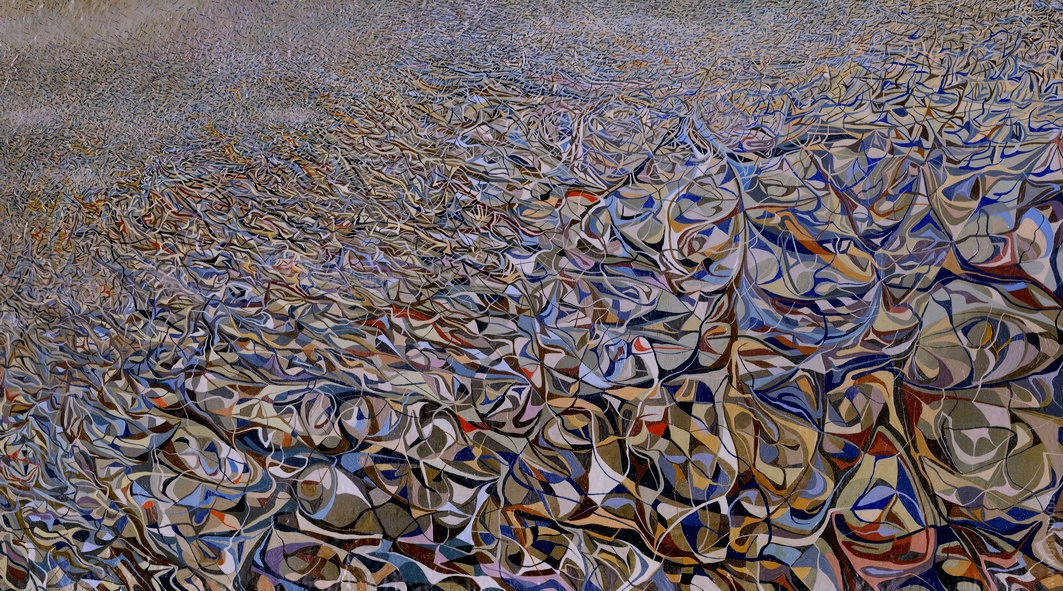 Fractal fragment of the picture: "The shadow of non-existing house". #1 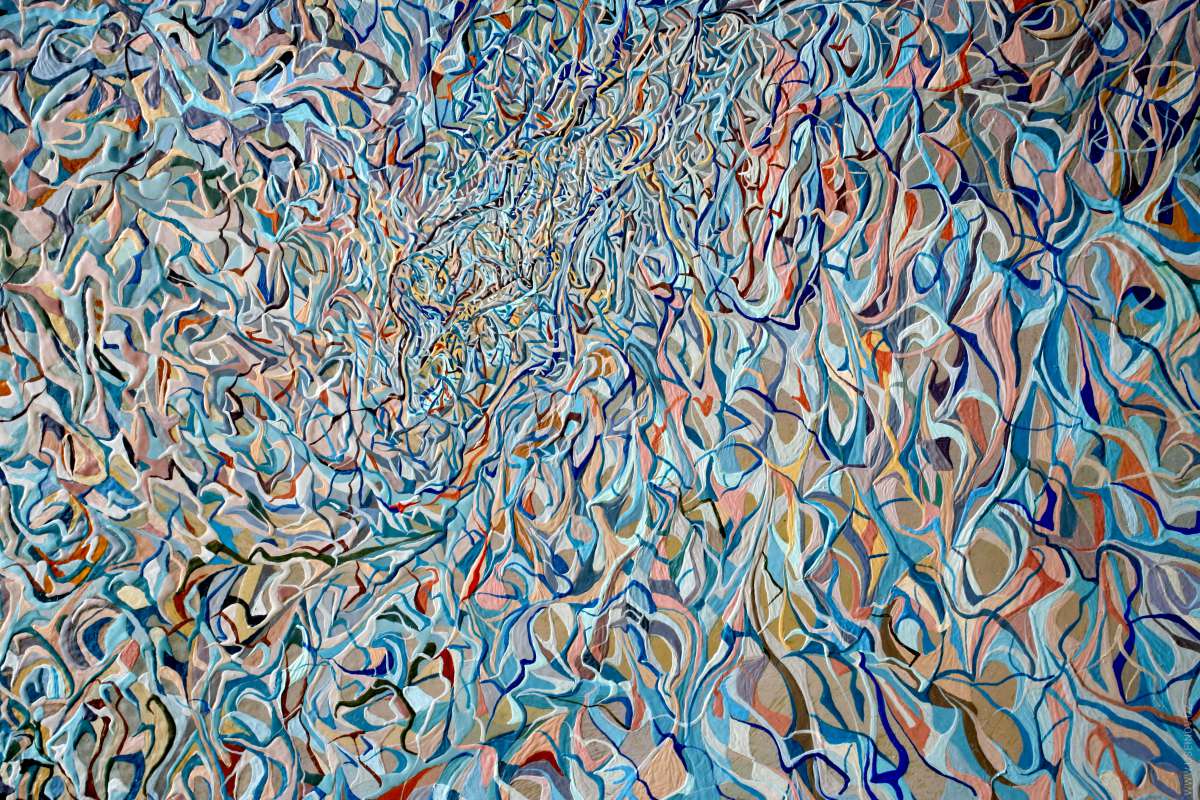 Fractal fragment of the picture: "The shadow of non-existing house". #2 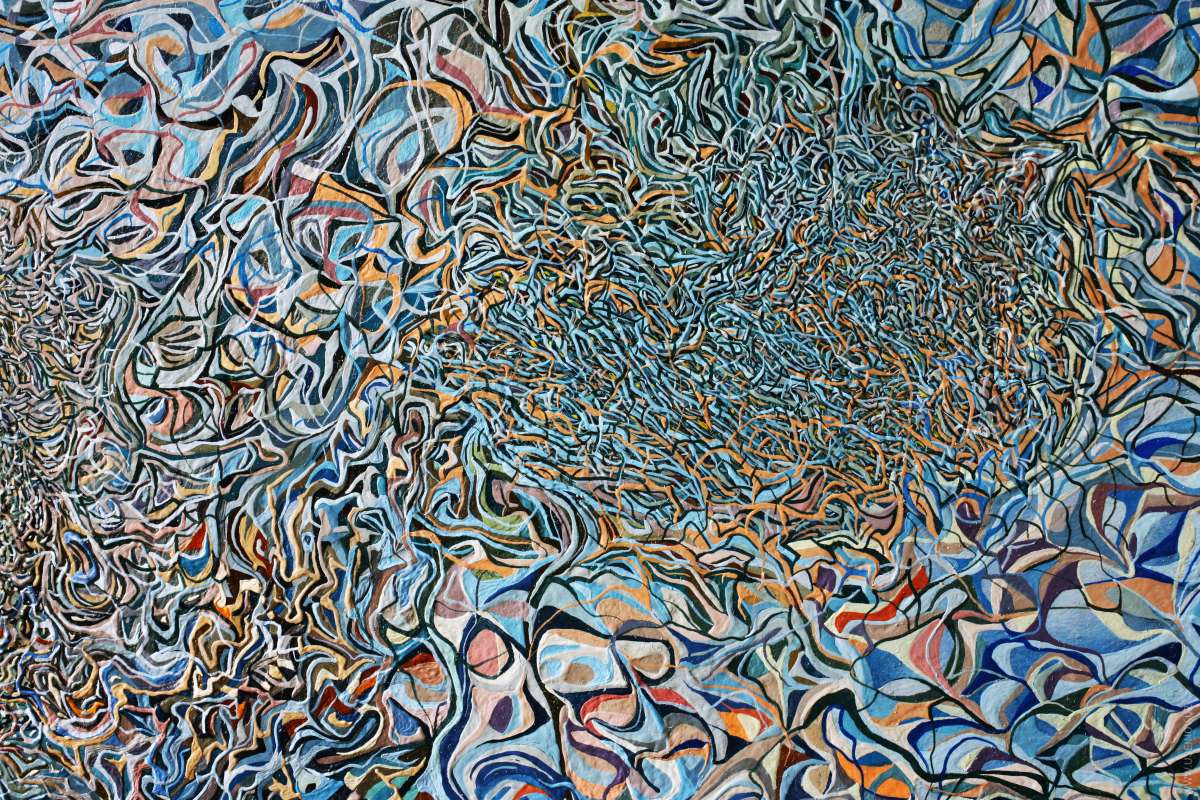 Fractal fragment of the picture: "The shadow of non-existing house". #3 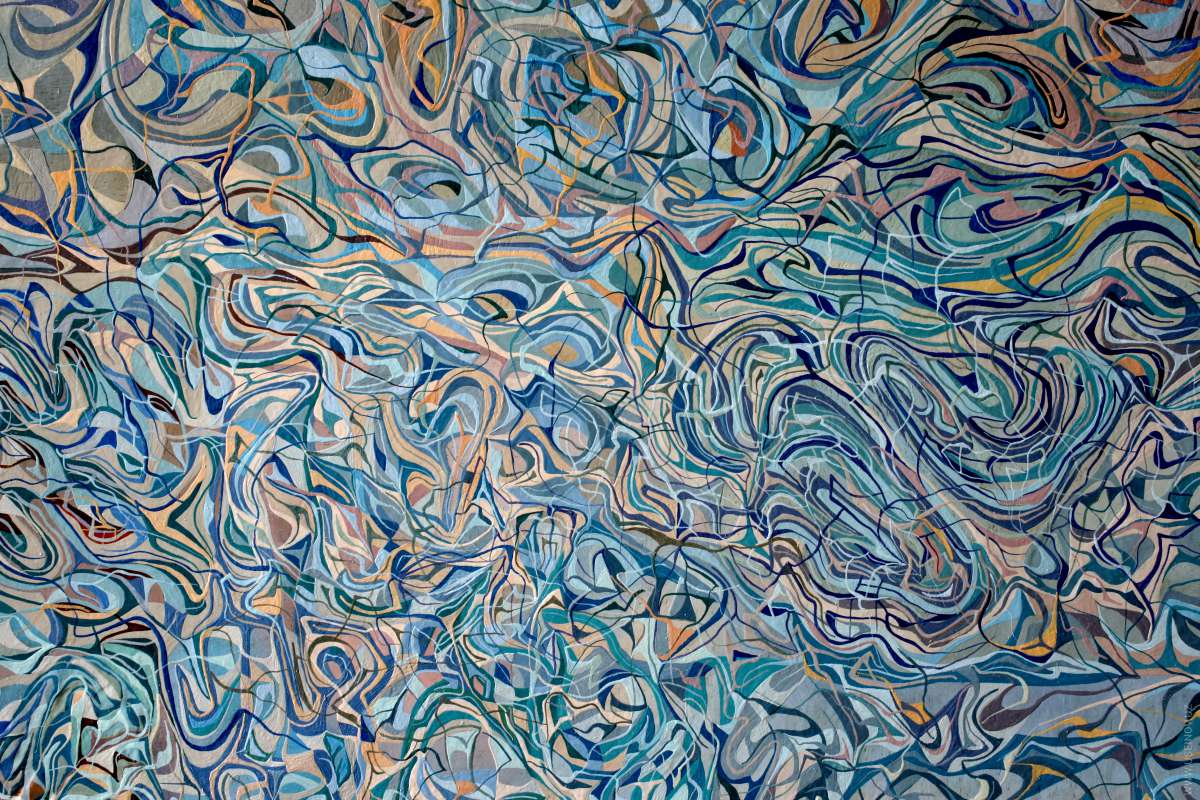 Fractal fragment of the picture: "The shadow of non-existing house". #4

Fractal fragment of the picture: "The shadow of non-existing house". #5 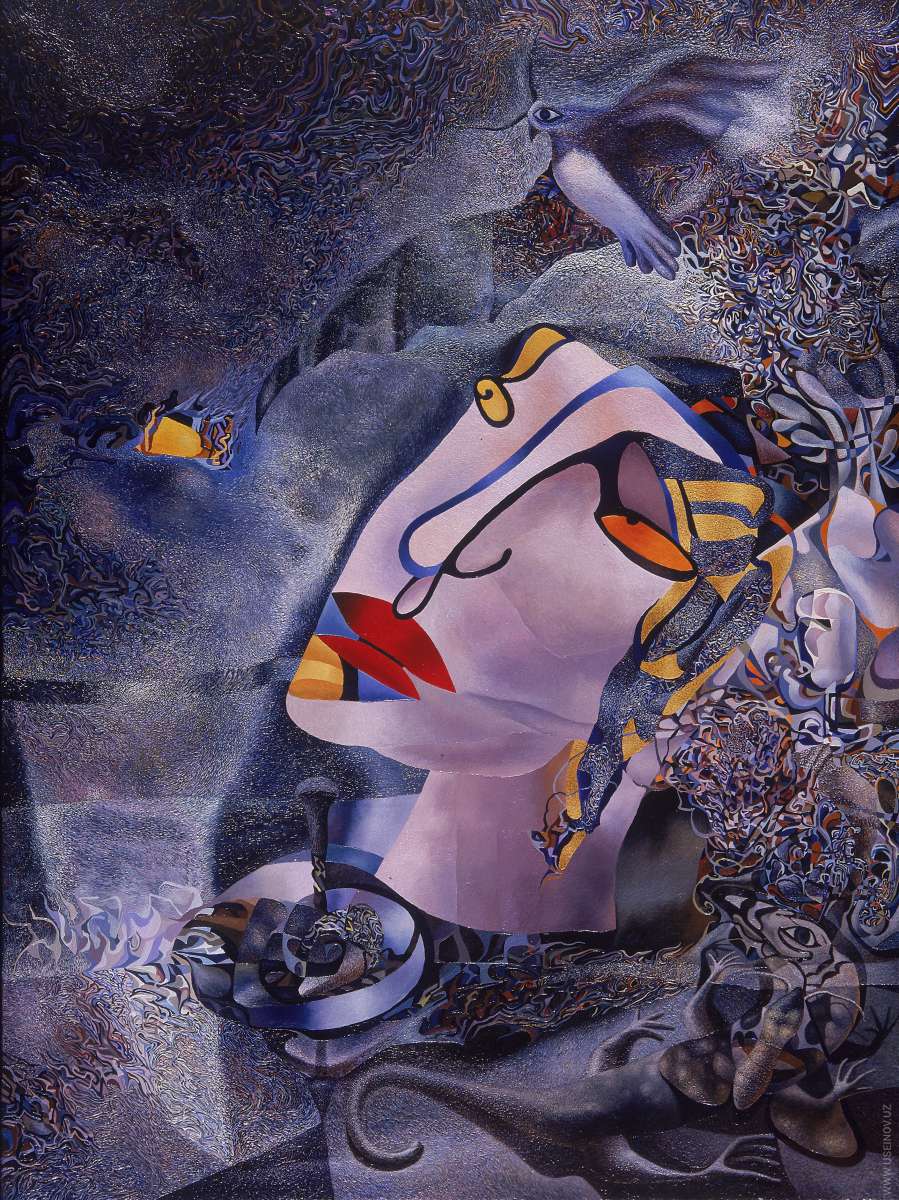 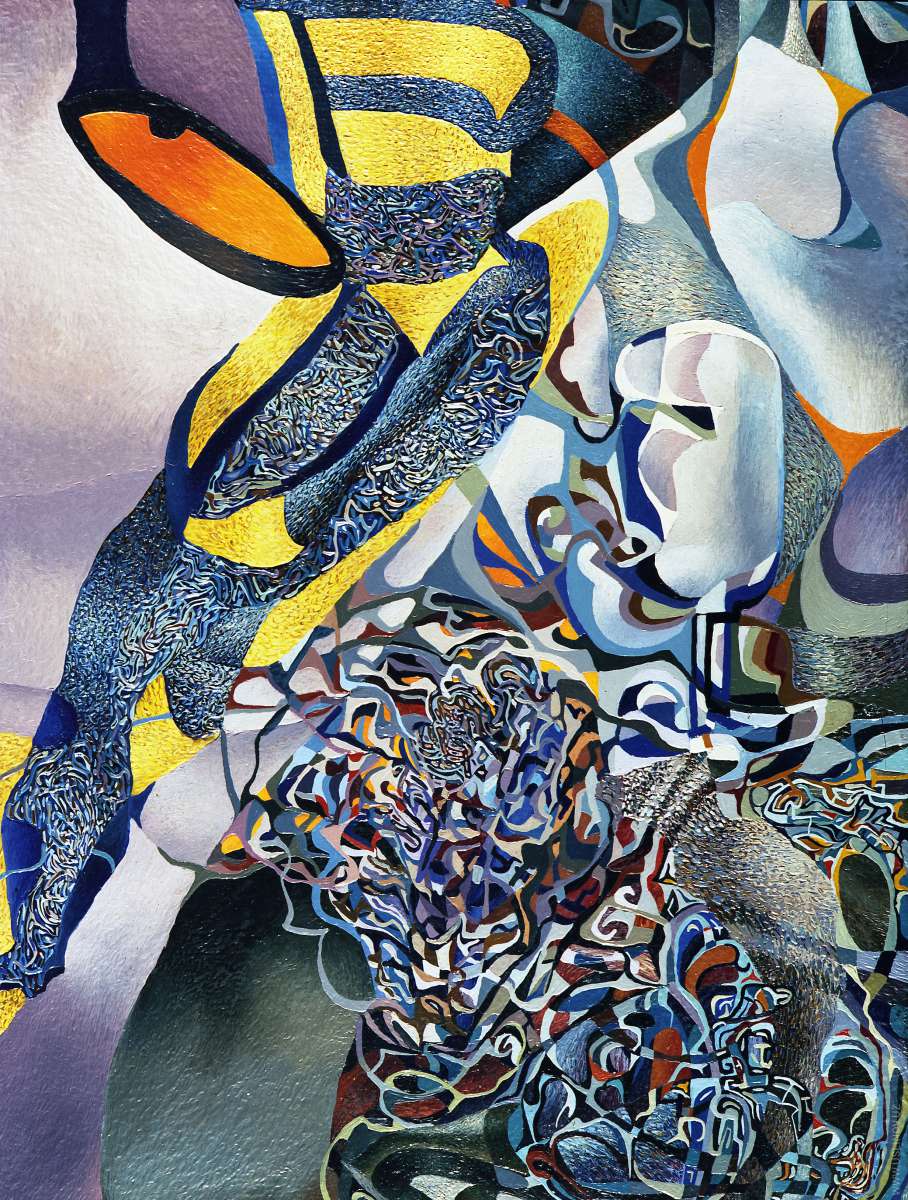 Fractal fragment of the picture: "Mists of the Condemned Lips". #1 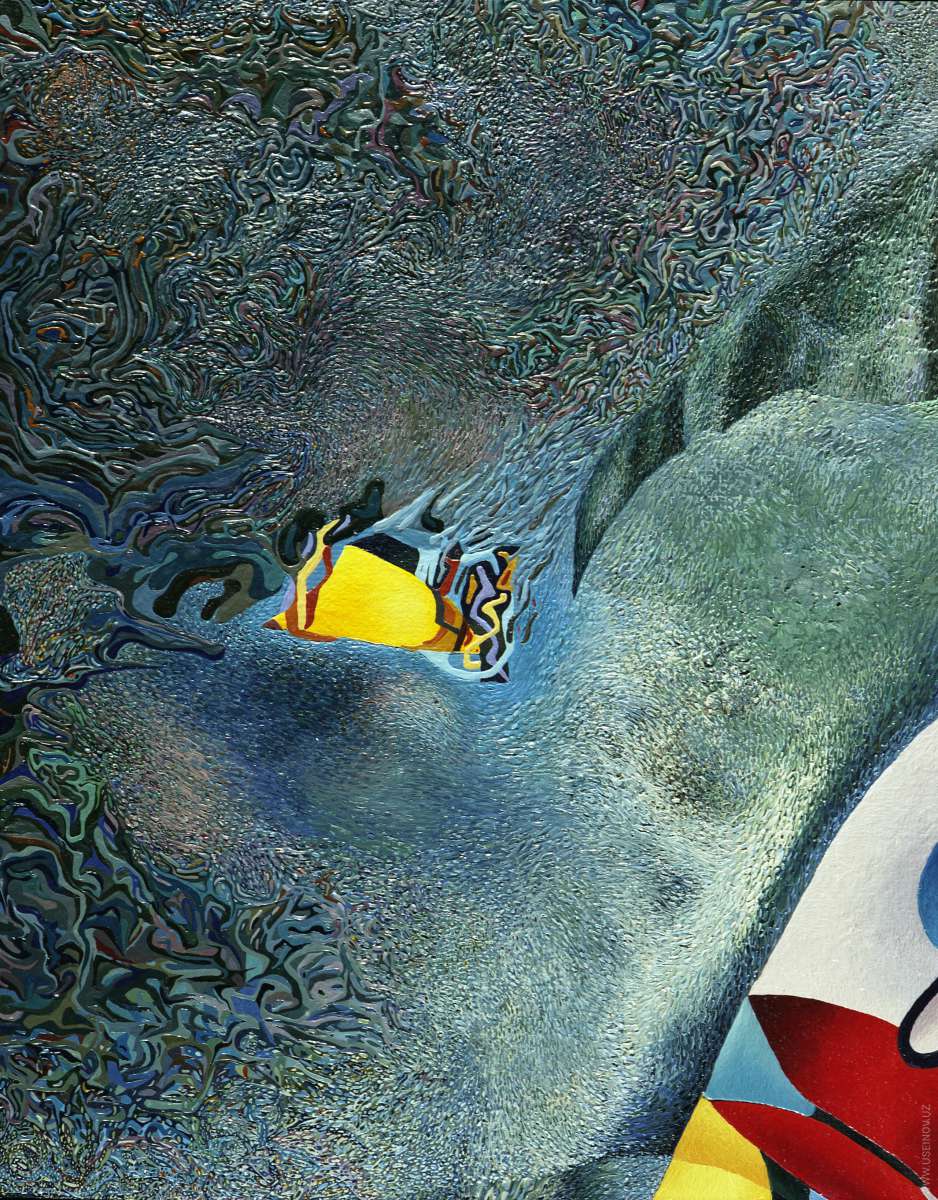 Fractal fragment of the picture: "Mists of the Condemned Lips". #2 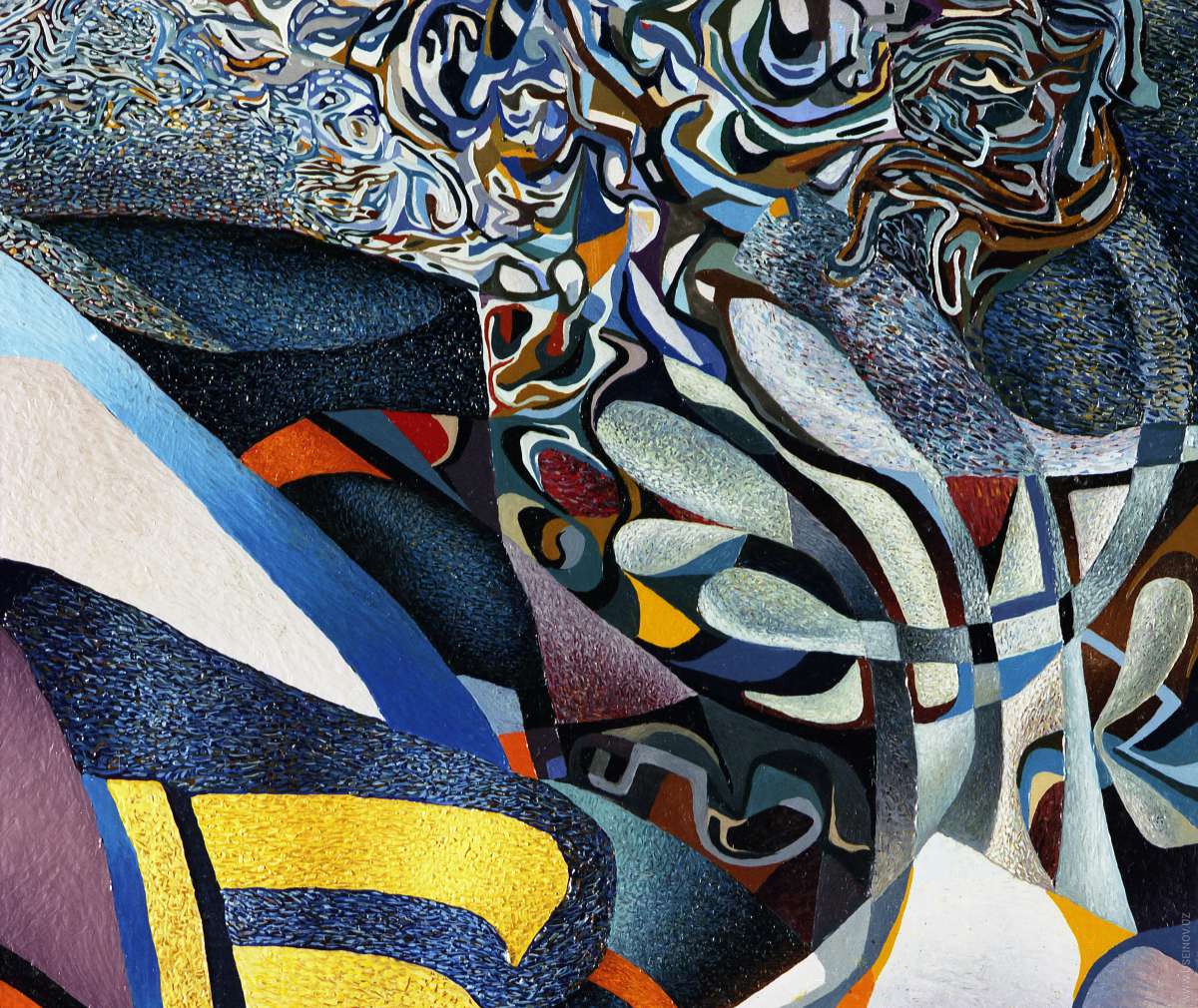 Fractal fragment of the picture: "Mists of the Condemned Lips". #3 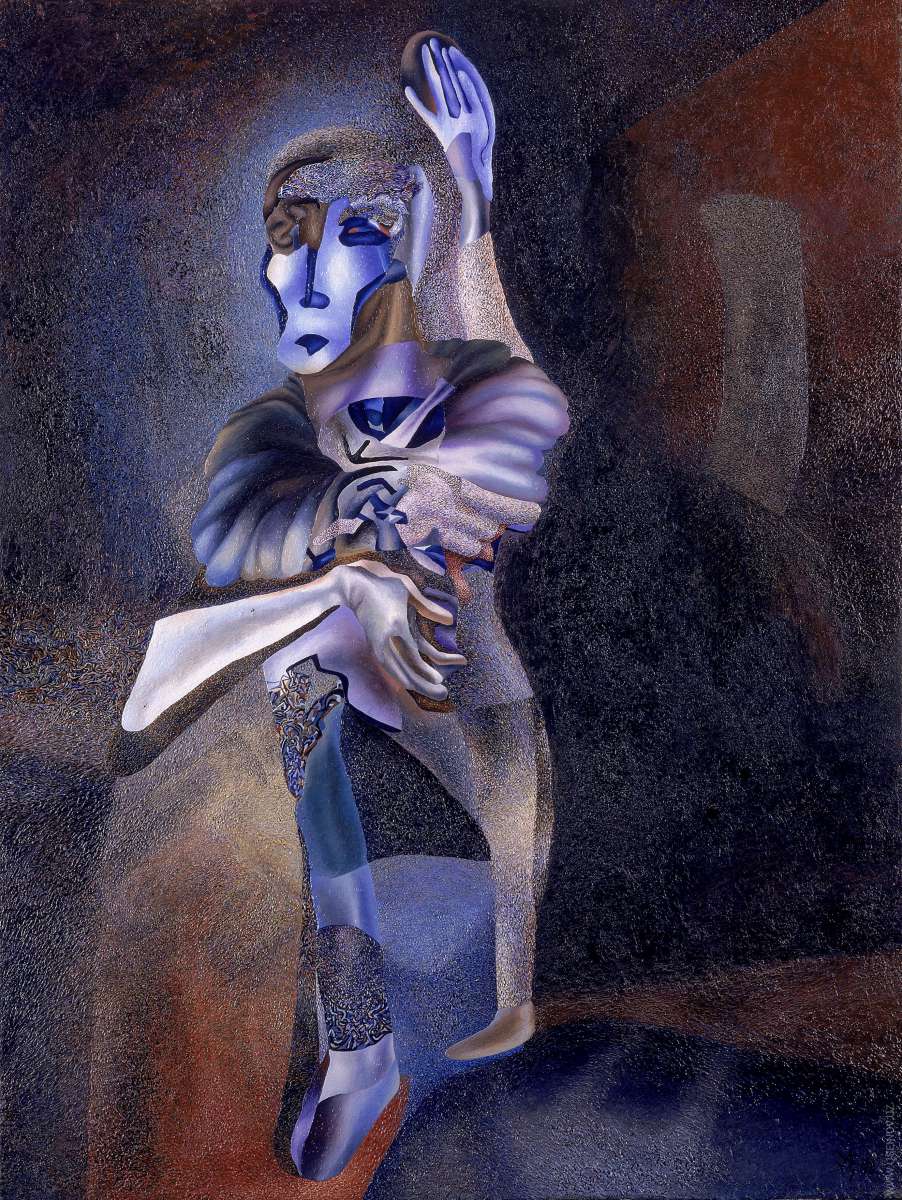